It seems that not a week passes without coming across another mysterious writer who undertakes to contribute a puff piece about Azerbaijan and to undermine the reputation of Armenia and Armenians around the world. 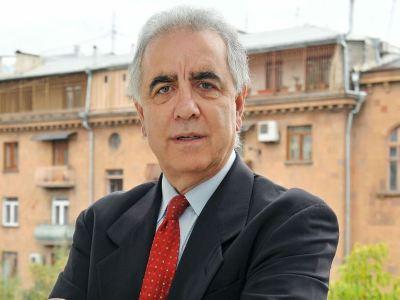 The latest such writer is Peter Tase who posted an article titled, “Russia’s Foreign Agents in America: Trump Connection of Armenian Lobbyists,” on June 11, 2018 on the Eurasia Review website.

This extremely biased article resorts to exaggerations and untrue allegations in order to link Armenia and various Armenian individuals to Russia, and even more surprisingly, to Pres. Donald Trump!

To begin with, Tase disparages Iranian-Armenian Gevork Vartanian’s praiseworthy actions during World War II by calling him “one of the most prolific Soviet Armenian spies.” In fact, Vartanian provided a major service to the entire world by thwarting Hitler’s plans to assassinate Stalin, Churchill, and Roosevelt while meeting as allies at the Tehran Conference in 1943. Tase undermines his own credibility by mentioning that CIA director Stansfield Turner and upper echelons of the agency trusted Vartanian. Why would they trust Vartanian if he were such a bad guy! Incredibly, Tase even states that he is suspicious of Vartanian because he spoke Armenian!

Tase then picks on two Russian Armenian journalists -- Margarita Simonyan and Gayane Chichakyan -- who work for RT (Russia Today) TV. Their only guilt is that they are “good looking” women, and without any evidence Tase accuses them of being “ethnically Armenian, as are many other ‘Russian’ agents of influence.”

Perhaps the most sinister part of Tase’s article is falsely claiming that Armenian-American reporter Emil Sanamyan is “a foreign agent.” This is a completely untrue allegation. Mr. Sanamyan told me that he is not now, nor has he ever been registered with the U.S. Justice Department as “a foreign agent.” I hope Mr. Sanamyan will sue Peter Tase and his website for damaging his reputation. To show the degree of Tase’s blind hatred for anything Armenian, he accuses Sanamyan of working for “Americans for Artsakh,” an organization “established to bring legitimacy to the war crimes and illegal occupation by the Russian-backed Armenian military that has been ruthlessly perpetrated (long before Ukraine and Georgia, the Russian government has used Armenian soldiers to occupy Azerbaijan’s sovereign territory, arrest development and derail a Pro-Western course of Azerbaijan).” Not a single word is true in that sentence. The Russian government did not use Armenian soldiers. Armenians liberated themselves from Azerbaijan’s oppressive regime which committed mass crimes against Armenians of Artsakh for decades! In fact, Russian soldiers sided with Azerbaijan and killed many innocent inhabitants of Artsakh. Furthermore, “Americans for Artsakh” was a non-profit funded by Armenian-Americans. Sanamyan told me that he worked there as an unpaid employee. In addition, when Sanamyan worked at the Office of the Nagorno Karabakh Republic in Washington, D.C., the organization was not yet registered with the U.S. Justice Department as “a foreign agent.” Also, Tase makes up a fake title by claiming that “Sanamyan was in charge of information warfare and propaganda as Director of the NKR Public Affairs Office.”

There are also several minor errors in Tase’s article which show his lack of knowledge of Armenian issues. For example, Tase writes about Armenia’s independence from “Soviet Russia,” instead of the Soviet Union. The second nonsense is Tase’s comment on a photo of Pres. Serzh Sargsyan with Pres. and Mrs. Trump at the United Nations in New York. Tase attributes the photo to the lobbying effort of the Armenian-American community. However, no lobbying was necessary. If Tase did a little more research, he would have discovered another photo of Azerbaijan’s President Ilham Aliyev with Pres. and Mrs. Trump at the UN, along with photos of many other heads of state. Another intentional misrepresentation by Tase is that Sanamyan’s wife, a graduate of Cass Business School, City University London, was one of the “Major Donors and Sponsors” of the University in 2012. Tase fails to mention that Sanamyan’s wife was listed under the smallest amount category -- less than $1,000 -- which does not make her a major donor!

Tase’s next attack on Armenians is their alleged connection to Pres. Trump. This is where Tase makes his most ignorant accusation. The reality is that there are hardly any Armenians who know Pres. Trump; so Tase invents imaginary connections. Tase even dares to misrepresent my 2016 article headlined, “Armenians Should Reach Out to Trump Through Republican Friends in Congress.” If Tase was an honest reporter, he would have quoted from my article which stated: “Armenian-American ties with the President-elect are practically non-existent.”

Tase also misrepresents the statement posted by Aram Hamparian, Executive Director of ANCA, offering to work with the newly-elected President. There is no indication in that sentence of any link between Armenian-Americans and Trump. Scraping the bottom of the barrel, Tase comes up with a totally unknown name, Andy Surabian, as “another Armenian political operative deep inside the Trump White House.” Surabian is described as “Steve Bannon’s political advisor in the Trump administration and a campaign veteran.” Unfortunately for Tase, neither Bannon nor Surabian work at the White House anymore.

Tase then mentions the name of Keith Nahigian, as “perhaps the most influential and high-ranking Armenian Diaspora member and registered lobbyist associated with the Trump campaign…who was tapped to head Trump’s transition team in 2017.” This is yet another red herring. Nahigian has no connection with the Armenian community. I sent him an email two years ago and I am still waiting for his answer. That’s how close Nahigian is to the Armenian community!

Tase prematurely refers to congressional candidate Danny Tarkanian (R-Nevada) as a member of “the Armenian lobby with access to President Trump.” Should Tarkanian win his House seat in November, we shall be able to determine how close is his connection to the White House?

Tase falsely concludes his baseless and shameful article by stating: “These extensive and deep links to the incumbent inexperienced president and his campaign create potential national security implications and deserve scrutiny to ensure that Putin’s ongoing meddling into the U. S. Homeland would crumble and miserably fail.”

I don’t think Pres. Trump needs Armenian-Americans to establish communication with Pres. Putin. Contrary to Tase’s unfounded allegations, Pres. Trump has had a direct link to the Kremlin for a long time and does not need anyone else’s assistance!